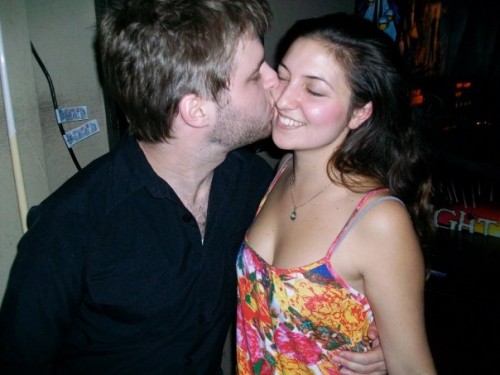 As of this week, Chelsea and I have been going out for three years and after countless barbershop tags, covers and miniature songs I have finally been able to write her an honest-to-goodness song song. I'll admit it's cheesy and trite and doesn't properly rhyme, but it's a song. A real song. Finally.

For Chelsea, after three years: "Driving"

I had to get to UPS to pick up a pair of boots.
You offered to give me a lift if I'd buy you a beer.
So we went driving in your car, though it wasn't very far,
We got lost and laughed at all the things we would become.

You had to wake up before dawn to help your friend catch a flight.
I tagged along just to be with you in the early morning light.
So we went driving in your car, underneath the stars.
Then we went up the hill and watched the sunrise though the fog.

Now you've sold your car and bought a bike though the pedals made you sacred.
And my parents gave me their old car which I share with you.
Now we go driving in my car, which we never could before.
And it isn't much but it's an excuse to be close to you