Yesterday I spent an hour building a website that suggests absurd sexy halloween costume ideas. Just 24 hours later, it has received a surprising amount of attention. You can find it at: WhatTheFuckShouldIBeForHalloween.com

An example of whatthefuckshouldibeforhalloween.com’s suggestions: 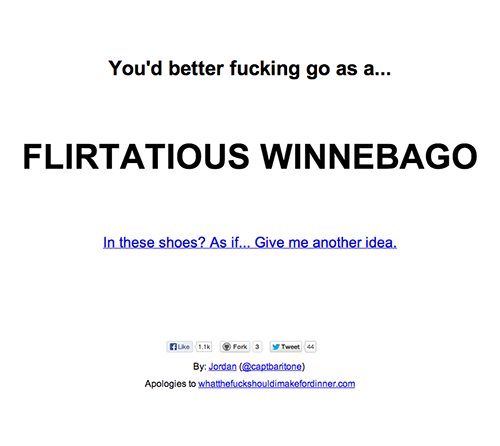 Last year around this time, I had an idea for a halloween costume idea generator that would play on the fact that halloween costumes have a reputation for gratuitous sexuality. The idea was that you could prefix any non-sense noun with the word “sexy” and make it a hilarious costume idea. It turned out, that wasn’t quite true. Nouns, as a whole, are actually pretty boring so I gave up.

This year, however, I remembered the idea and decided to try it with a list of “funny” nouns. I trolled the internet for a list of funny nouns and found nothing satisfactory, so I started my own. A half-hour later I had a working prototype and decided it was funny enough to merit purchasing a domain name. I had shamelessly cribbed the aesthetic (both comic and visual) from the hilarious whatTheFuckShouldIMakeForDinner.com (big debt of gratitude to them, buy their fucking cookbook) so I chose:

A few hours later I had the domain name pointed to my server. I wrote a tweet about it, posted a similar message on Facebook and went to dinner.

As of now, 24 hours later, the project has received:

It has been just incredible to watch it spread like this first-hand. My “publicity” consisted of 30 seconds of typing and the project has already engaged thousands of people just a day after I started working on it! I’m reminded how empowering the internet is. If you have an idea that people want to share, you can reach the entire internet without having to spend a cent.

I have released the source code for the site into the Public Domain. You can find it, and submit suggestions at the GitHub repository.