A Tour of Winamp2-js Features 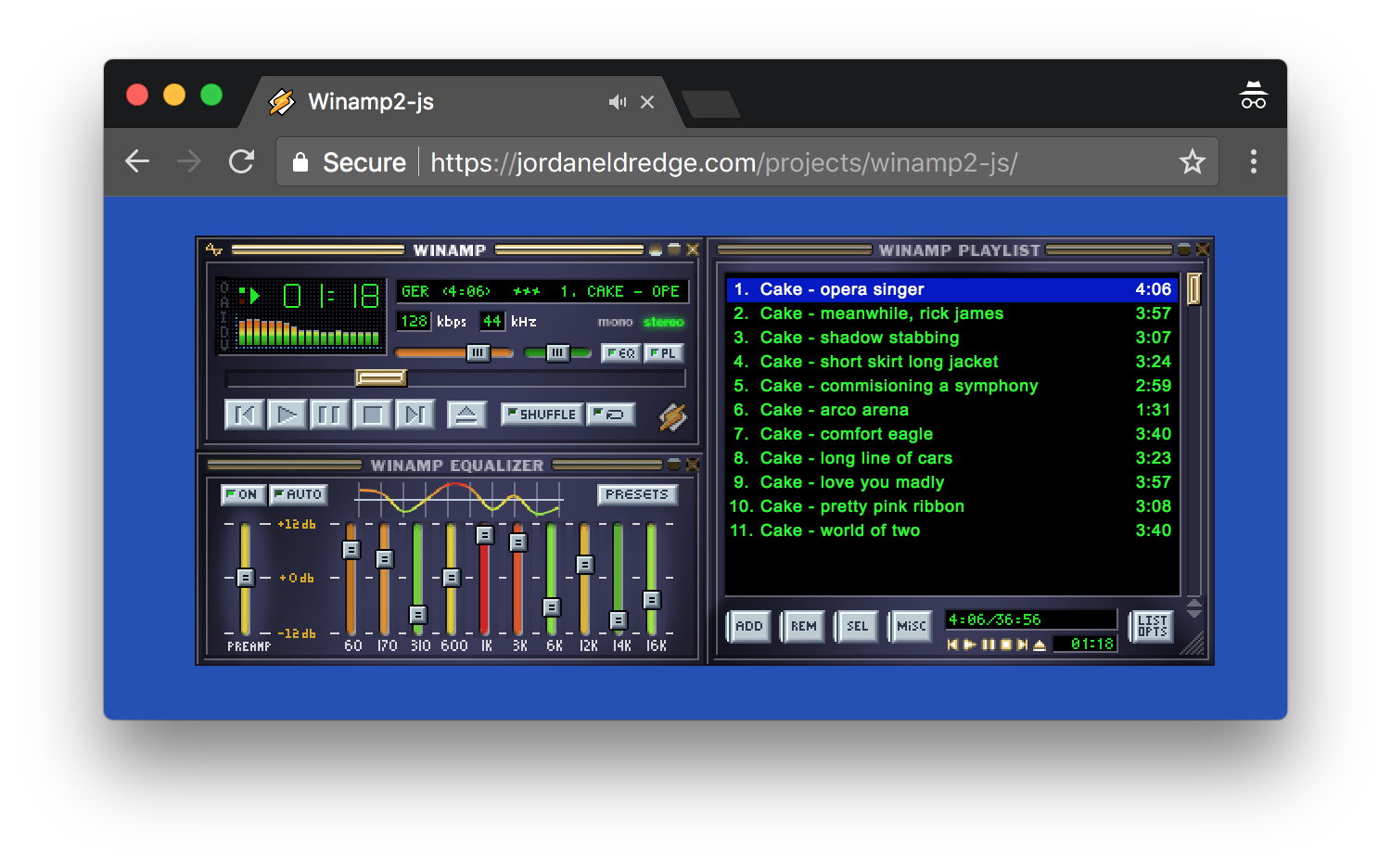 Sitting on my bed one evening in October of 2014 I had an idea: I could use CSS sprites to render original Winamp skin files in the browser. I got so exicted about the idea that I worked on it late into the night. For the next three years I continued, off and on, to hack on this silly, yet entrancing project.

As of last month, all three main windows are complete (Give it a try!) and it finally feels like an actual media player.

To celebrate this milestone, I thought I'd share a few of the more interesteing features that Winamp2-js has successfully reimplemented and a few technical details behinnd how they were implemented.

Winamp skins are, under the hood, .zip files that contained some .bmp sprite sheets and a few config files. Thanks to Stuart Knightley's library JSZip, we can actually extract/parse real Winamp skins in your browser. Just drop the skin file into the main window. Check out How Winamp2-js loads native skins in your browser for a detailed explanation of how this is achieved.

Adding the playlist window involved refactoring my entire approach to playing audio, since I had to be able to manage multiple audio tracks at a time. Now you can open multiple files at the same time, via the Eject button, or drag in multiple files. We even respect where in the playlist you drop them!

The Web Audio API exposes an AnalyserNode which gives us access to Fast Fourier Transforms of our audio stream in real time. Combining this with the Canvas API we can relitively easily draw real time visual representations of the audio you are hearing. So far I've have implemented both the waveform/oscilloscope visualizer and the bar graph visualizer.

Eventually I would love to support some of the more advanced visualization plugins that Winamp had, such as AVS presets or MilkDrop. Lucklily with WebGL this should be possible to do in the browser. In fact, butterchurnviz.com is a highly impressive MilkDrop clone, and the author has expressed interest in making it avalaible in Winamp-js.

Additionally there are two different efforts to bring AVS presets to the browser. Both are being discussed in https://gitter.im/visbot/AVS.

The Web Audio API provides all the primitives needed to implement a frequency band equalizer. I had to learn about all this stuff from scratch, but basically you can chain together some BiquadFilterNodes, one for each frequency, and connect the sliders to the gain of those nodes.

The bigger challenge was actually the colored line which illustrates the values of the EQ. First, the line is not just a collection of straight line segments, the line is "splined" to create a smoother curved line. Thanks to the awesome cardinal-spline-js by @epistimex, this was just about as easy as yarn add cardinal-spline-js.

Secondly, this curved line is not just a single color, it's a gradient. And more than that, the gradient is defined as a single line of pixels in a sprite sheet within the .wsz skin file.

As luck would have it, the Canvas API lets you draw lines with a strokeStyle of a CanvasPattern which can just be an image! Since we already have the ability to slice individual sprites out of a skin file, this was trivial.

Winamp defined a propritary .eqf binary file format for exporting your EQ presets. Having never delt with binary formats before this was a steep learning curve for me. Luckly the format is very simple, just a name and eleven values. I wrote a little parser/generator as an NPM package winamp-eqf in case anyone else ever wants to deal with these files. Now you can save your presets locally and load any presets that you happen to have kept around for the last twenty years.

Export your playlist as an .html file

Here is another feature hidden away among Winamp 2's many menus. You can export your current playlist as an HTML file. To get this to work, all I had to do was:

Each window can exist in two different modes. Regular and "shade" in which the main functionlity is compressed into the size of the title bar. Nothing special here technically, we just had to implement twice as many windows. :P

A few months after starting my job at Facebook, I was talking to a collegue about Winamp2-js. I mentioned that I eventually wanted to support ID3 tags. I had looked around for JavaScript libraries that could do this a few years ago, but I hadn't had time to evaluate them since. Amazingly he said: "Oh, I wrote one of those libraries!". A few days later I integrated jsmediatags into Winamp2-js. Now we can read the metadata from MP3s, FLACs and more. Small world! Thanks @aadsm!

One of those config files that make up a Winamp skin is region.txt which provides a series of coordinates which map out areas of the skin that should be transparent. Originally I assumed this would not be possible to support in the browser, but afer reading SaraSoueidan's excellent article CSS SVG Clipping, I realized it is! All I had to do was:

Winamp is split into three main windows, but usually you don't want them just spread randomly arround your desktop; you want them arranged in some neat and tidy configuration. To help you achieve this, Winamp windows "snap" or "dock" if you get them close to one another. I reimplemented this detail as well. Truth be told though, this code is very ugly and probably 10x more complicated than it needs to be. Hopefully one day I'll come back and clean this up.

Hotkeys for all the major pieces of functionality are supported. With the Redux architecture I'm using these global hotkeys were super easy to add. There's even a Winamp easter egg, triggered from the keyboard, that I've reimplemented. See if you can find it!

Drag tracks to reorder them

This feature was a nice remider as to why you never want to have to reimplement things like multi-select from scratch. When the user clicks on a selected track, we add a mousemove event listener. On every event, we decide how far we've moved in the Y axis, and move the selected tracks based upon this data. It's made more complicated by the fact that the selected tracks may not be entirely sequential, so we need to have a special algorithm to merge them.

Even at older resolutions Winamp looked pretty small, and monitor resolution has only increased in the interveneing years. To address this, Winamp had "double" mode which doubles the size of the two non-resizeable windows. With the CSS transform: scale(2);, the resizing was super simple. The only trick was getting the browser to use a graphical resizing algorithm that is friendly to pixel art. We want each individual pixel to be rendered as four individual pixels in the resized version, we don't want them blurred, like you would for a photo. Again, the CSS spec has our back. image-rendering: pixelated; does exactly this.

You can enable double mode with they hotkey ctrl+d or by clicking the "D" in the "clutter bar" to the left of the visualizer in the main window.

One feature that I haven't yet implemented is Winamp's strategy for rearranging windows as you resize them. For now, when you enter double mode, you end up with the windows sitting on top of eachother, which is a bit of a shame.

Getting all of this to work entirely in the browser has been a great challenge, and I've learned a lot. While in many ways the project feels "done", I doubt I will stop working on it in the forseeable future.

I still have a list of UI details which are not quite right:

Beyond those, I'm not entirely sure where this project will evolve. Here are some of the things I'm currently exploring to one degree or another:

If any of these things sound interesting to you, please reach out to me on Twitter.

While this project has been primarly me working alone on my couch, there are a few people who have made it measureably better through their indirect contributions:

Thanks to Darren Owen for being an invaluable source of insider information.

Thanks to LuigiHann for catching many small places where I hand't perfectly recreated Winamp's handling of skins.

Thanks to Jake Rodkin for the original retweet which I believe kicked this whole thing off more than three years ago.

And of course, thanks to Justin Frankel.